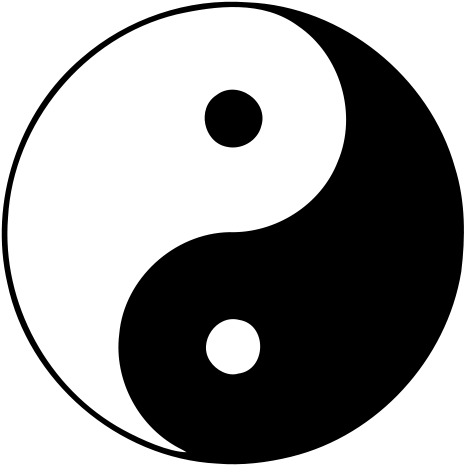 In Taoism or "Daoism" the Tao ("The Way") is sought after as a mode of harmonious living.
Taoism differs from Confucianism by not emphasizing rigid rituals and social order. [1]
While it is a very ambiguous "religion" and is sometimes confusing, one could consider Taoism a traditional philosophy in which there are many deities, rituals and worship, and attainable spiritual immortality (though not an 'afterlife' per se), all under the natural order of the Tao.
The number of adherents to Taoism could range widely from 12 million to 173 million:
"The number of Taoists is difficult to estimate, due to a variety of factors including defining Taoism. According to a survey of religion in China in the year 2010, the number of people practicing some form of Chinese folk religion is near to 950 million (70% of the Chinese). Among these, 173 million (13%) practice some form of Taoist-defined folk faith. Further in detail, 12 million people have passed some formal initiation into Taoism, or adhere exclusively to it." [2]
The "Tao" in Taoism refers to the natural flow and cosmic structure of the Universe. Taoism emphasizes detachment from desires, simplicity, and Wu Wei: action through inaction.
The goal of a Taoist is to align themselves with a natural way of being, as effortless as the planets revolving around the sun. The thought is that the planets and nature in general does as it does without asserting control or force. The planets do not attempt to revolve themselves...but they do. Hence, action through inaction.
Heavily influenced by the I Ching (the oldest Chinese classic) Taoism's roots go back to at least the 4th century BCE with the School of Naturalism. The keystone work of the Taoist tradition is the Tao Te Ching by Laozi, along with the later writings of Zhuangzi.
Taoist clergies usually take care to note distinction between it and Chinese Folk Religion, Chinese astrology, Zen Buddhism, any martial arts, feng shui, and qigong, as they are often mistakenly thought of as pertaining to Taoism, especially in Western societies.
Taoism's several key ambiguous terms-- Tao (the flow of the universe), Te (the active expression of Tao), and Wu-Wei (action without intent, effortless action, or flow of acts), and more--work to describe an ideal life in which one places their will in harmony with the natural universe. A natural life is one of ease, free of selfishness and desire, with enjoyment of simple things.
The Taoist Three Treasures are the primary virtues of a Taoist:
Taoism could be considered pantheistic. One of the the core beliefs shared by nearly all sects is the emphasis on the formlessness of the Tao and the primacy of "The Way". [3] Different branches of Taoism have differing pantheons of deities. But, similar as with Chinese Folk Religion, one must be careful not to confuse conceptions of Tao with Western conceptions of theism. A Taoist's life may show regular fasting, vegetarianism, and rituals and holidays that involve sacrifices to the spirits of the deceased. Similar to some other Eastern religions, the constructs of faith and the beliefs themselves may not be the "religion" but rather the collective philosophies applied through the lives of the practitioners.

Wikipedia
Facts and Details Taoism: Not as much depth as Wikipedia, but somewhere between it and this page.
BBC on Taoism: A well-constructed online look at Taoism
tao.org: website for the Center of Traditional Taoist Studies
I Ching Online: You can get a reading from the I Ching on the internet. Taoists use this to understand change.
PersonalTao: a pretty comprehensive website with a running blog, and services like workshops and Taoism retreats.
Taoism.net: articles, FAQs, Q&A, and general info. Like an extended resource list with added snippets of insight.

The fundamental Classic text of Taoism.

A text from 476-221 BCE, this is the other foundational text of Taoism besides the Tao Te Ching

The classic Chinese divination system stemming from around 1150 B.C. Taoists use it as a guide to understand how change occurs, as decried by Laozi in the Tao Te Ching.

Another Taoist staple, compiled in the 4th century CE, but text from Lie Yukou from the 5th century BCE.

A surprisingly popular book on Taoism, conveying its lifestyle as characterized by Winnie the Pooh.

Taoism in Brief: 25 minutes, a video by the Institute of Taoism that also shares info on Tai Chi and contains video footage of ceremonies. ~25 min
Taoism: A Quest of Balance: a 1977 documentary about Taoism, also touching on Confucianism, folk religion, and Buddhism in China. ~52 minutes.
What is Taoism: A quick explanation of Taoism and its principles from a modern angle by a Westerner. ~5 min
Taoism - the Three Treasures of the Tao: here is a Taoist master discussing the fundamental Three Treasures. ~11 min
Alan Watts - the Taoist Way: outspoken counterculture icon and early bridge to Eastern thought, Alan Watts gives a lecture on Taoism. ~1 hr 20 min
[contact-form-7 id="6784" title="Contribute Box"]