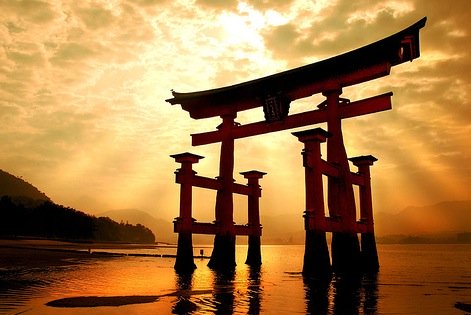 Shinto is a Japanese religion focusing on diligent ritual practices that connect the present to the ancient past. Stemming from the 8th century, Japanese mythology and native beliefs have resulted in many shrines devoted to the worship of various gods called "kami".
Kami more specifically refers to the divinity or sacred essence that manifests in several forms: rocks, trees, rivers, etc. Some people can be said to possess the nature of kami. Kami and people are not thought as separate, but rather existing in the same world and sharing in its interrelated complexity. [1]
Most people see Shinto as "Japan's religion" as it is practiced by about 80% of the population. But in fact, most Japanese do not consider themselves "Shintoists", as in their language it is not necessarily a religion. People attend shrines and beseech kami without belonging to any Shinto institutional religion. There are 81,000 shrines and 85,000 priests in Japan. [2]
Shinto manifests itself into the lives of most Japanese people as Folk Shinto, collections of ancient local traditions that include divination, spirit possession, and shamanic healing.
In Shinto, "kannagara" refers to the law of the natural order. Stemming from it is understanding and the basis of Shinto ethics.
Shinto recognizes 5 "distinguished heavenly gods", 2 originating kami (creators), the two kami for Enery and heaven, and one "Amenominakanushi", the first kami and source of the universe who came into being alone. [3]
Shinto asserts that certain deeds can bring ritual impurity, which one should want cleansed for their own well-being. Purification rites called Harae are performed on a daily, weekly, and seasonal basis. These Harae are the lifeblood of Shinto and have conformed and been adapted into modern Japanese living in a multitude of ways. For example, when a new building is erected it is typically blessed by a Shinto priest at the groundbreaking ceremony. Even many cars made in Japan have been blessed by a Shinto priest.
Shinto has a diverse look at the afterlife. When a child is born in Japan, they are registered at a local shrine as a "family child" and when they die, their status changes to a "family spirit" or "family kami". There are also Japanese legends that mention the dead going to a place called "yomi", a gloomy underground realm that closely resembles the Greek Hades.
Ritualistic kami worship is performed at shrines, either public or small home shrines. Shrines are fronted by a distinctive gate called torii, which are made of two  uprights and two crossbars denoting the separation between casual and sacred space. Shrines are organized and manages by priests, who typically are the only ones entering the inner-most precincts of a shrine's grounds, where the symbol of the kami is usually held. Shrines conduct periodic rituals and festivals throughout the year.

Wikipedia
Jinja Honcho: The official website of the Association of Shinto Shrines.
BBC on Shinto: a page similar to this one but with more depth
Gods of Japan: a huge list of gods and explanations of myths from Shinto, with ties into Buddhism and even Chinese religion.
Visit Miyajima: a tourism site for a Japanese city explains with a short and practical guide Shinto and its syncretism with Buddhism.
Facts and details of Shinto Shrines: in-depth details about the staple physical aspect of Shinto.
Tsubaki Grand Shrine of America's Facebook: follow events and happenings of Shinto in English!

The oldest extant chronicle in Japan, a collection of myths in Shinto.

a record of Ancient Japan, translated and annotated with Commentary

An online PDF intro to Shinto.

a rounded introduction by a well-respected Shinto scholar.

The Guise of Shinto in Contemporary Japan: An attempt to understand Shinto's continuing relevance to Japanese culture.

An inside look at Nagasaki's premiere shrine.

A Book of Prayers: a collection of Japanese Shinto prayers in English.

A look at the development of Shinto over time, this book is a must-read for understanding Shinto in a historical context.

A guide to the sacred sites of Japan's ancient religion.