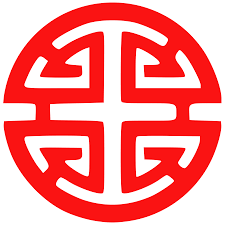 China is huge, but it has some strong factors that bond it into unity. One thing that bonds common people and high government officials alike is the amalgamation of traditions, myths, and culture that is Chinese Folk religion. It's hard to pin a finger on what is Chinese Folk Religion, as the practices are so diverse from province to province and village to village. In each of its diverse manifestations, institutional and ritual behavior are highly organized.
Along with an overlying belief in a natural order, worship is devoted to a multiplicity of gods and immortals, who can be deities of phenomena or of human behavior, ancestors, and natural forces.
Taking historic influences from Buddhism and Taoism, here is a common core of 6 theological, cosmological, and moral concepts within Chinese Folk Religion:

Most westerners have also heard about Yin and Yang, the polarity that describes the order of the universe. The sacred medium of the two states on Yin ("receptiveness") and Yang ("act") is also thought of as the order of creation, "Ling". [1]

A Way of Community

Unlike Western religions in which the religion and its organizational structure, a "church", is separate from civic life, Chinese Folk religion pervades all aspects of social life and is deeply embedded in family.
Chinese religion also does not require "conversion" for participation. [2]
It's not about "believing" in a certain doctrine or dogma, but rather "belonging" to a local unit, "associtation, village, or kinship" with their gods and rituals. [3]

After the fall of the Chinese empire in 1911, Chinese Folk Religion was eradicated and undermined by the government and elites, which fragmented and thinned its followers. However the late 20th and 21st centuries are seeing a revival of these religions in mainland China and Taiwan. [4]

While these more concrete and familiar belief systems are considered a part of Chinese Folk Religion, some may distinguish them as "folk religion" compared to others tenets being "folk beliefs". [5] Still, they may also be called a system of philosophical and "ethical socio-political teachings". [6]
The Chinese philosopher Confucius lived 551-479 BCE
Confucian theology instructs to uphold the moral order through the worship of gods and ancestors. The core of Confucianism is humanistic, regarding ordinary human activities and relationships as sacred. Its core revolves around unifying the self with "Tian" which can loosely be translated to Heaven or God, though it is non-theistic.
This might be compared with the Tao in Taoism: the natural flow and cosmic structure of the Universe. Heavily influenced by the I Ching (the oldest Chinese classic) it diverged from Confucianism by scorning rigid rituals and social classes [7] and now uses the Tao Te Ching by Laozi as its keystone work. Taoism emphasizes detachment from desires, simplicity, and Wu Wei: action through inaction. The goal of a Toaist is to align themselves with a natural way of being, as effortless as the planets revolving around the sun.

The oldest of the Chinese Classics. Two and a half millenia of commentary and interpretation.

A study of Shamanism in ancient China

An introduction to Chinese Folk Religion.

A broad chronological range of sources and texts on Chinese religion.

A core Chinese classic, covering 722 to 481 BCE, it shows an overall history, including the use of ritual, sacrifice, celestial events, etc, and how they all played together.

The fundamental Classic Text of Taoism

A text from 476 - 221 BCE, this is the other foundational text of Taoism besides the Tao Te Ching.

Another Taoist staple, compiled in the 4th century CE, but text from Lie Yukou from the 5th century BCE.

The fundamental texts of Conficianism

The earliest anthology of Chinese poems, this is one of the basic texts of Confucianism.

written by Confucius, this is a collection of speeches and major events from ancient times and embodies the political vision.

General
Chinese Religion: A quick and simplified overview of only 15 minutes.
Lecture by Dr. Graeme Lang: An old but very interesting personal look into Chinese folk religion by a university professor in the 80's. This is a video lecture for one of his university courses. ~23 minutes
Taoism
Taoism in Brief: 25 minutes, a video by the Institute of Taoism that also shares info on Tai Chi and contains video footage of ceremonies.
Taoism: A Quest of Balance: a 1977 documentary about Taoism, also touching on Confucianism, folk religion, and Buddhism in China. ~52 minutes.
Confucianism
Confucianism with Andrea Scardina: A 40-minute youtube lecture about Confucianism and a great presentation, designed for university students. She also has videos on many other religions
School of Life: Confucius: a 5-minute video about Confucius's main social ethics and what they could teach us today.
Taiwan, the Most Confucian Nation?: A Taiwanese tourism and culture video about how Confucianism has translated to kindness and order in modern Taiwan
Chinese Confucianism, Past and Present: Harvard provost Peter K Bol gives a fascinating academic lecture on Confucianism and its modern implications for China. ~50 minutes total, with the last 10 minutes as question/answer.
References: