Ikigai is a Japanese word made of two words:

So, literally translated, it means “Life’s Worth”

However, its colloquial usage in Japan is more significant, and could be said to hold a fuller, more diverse definition. Here are just a few of the ways it’s been translated:

Okinawa, a Japanese island on which the inhabitants live inordinately long lives, may contain secrets to long and happy living. Okinawans don’t just live a long time. They also suffer from fewer chronic diseases, have healthier blood, experience more moderate menopause, have a stronger sex drive later in life, have lower rates of dementia in old age, and enjoy enviable levels of vitality.

When people study the cause of Okinawans’ longevity, they come up with a few answers:

The focus on having an Ikigai may be one reason why the idea of retirement simply doesn’t exist there.

Ikigai has seen its fair share of attention as a concept in recent years.

Since Dan Buettner’s book “Blue Zones,” which looks at the secrets of several global hubs of longevity, Ikigai is gaining traction in popular media. We’ll share on this page some of our favorite videos, articles, and books on the subject.

Many are touting it as Okinawa’s secret recipe to a long life.

And there seems to be some truth to that:

In a 2008 study from Tohoku University, researchers analyzed data from more than 50,000 participants (ages 40 to 79) and found that those who reported having ikigai in their lives had reduced risks of cardiovascular diseases and lower mortality rates. Put another way, 95% of respondents who had ikigai were still alive seven years after the initial survey compared to the 83% who didn’t.
-from Ken Mogi’s article on CNBC

It’s no wonder that it’s garnering interest around the world.

What’s It All About?

Put simply, Ikigai is a Japanese idea and framework for focusing on meaning in life.
As you probably know, if you’ve been reading elsewhere on the site, meaning and purpose are underrated. We think of meaning as the key to a life well-lived.

And it’s true that as humans, we work better with ideas when we have words for them.
That’s why we present relevant models on this site, containing 4 cornerstones for meaning, together with enablers (life skills) for living a happy life.

The four cornerstones of meaning are as follows:

Challenging oneself, engaging in play and experiencing awe, even exploring the world…they all translate to personal growth. That is the essence of this cornerstone.
Self-discovery not only creates meaning in our lives. It also gives us the means to craft it better in the future.

When we use our strengths we create meaning. Often in an interplay with Discovery and Exploration, Expression is an outward effort. Do you have a hobby? What do you enjoy about it? What makes you feel alive, engaging your curiosity and sense of self? What gives you a vessel for creative thinking and sharing? This is expression.

When we act in accordance with our values, it often means serving a “greater good” or a “higher cause”. This pillar to meaning in life can take many forms, from watering your neighbors plants during their vacation to devoting one’s life to environmentalism.

A skill, an experience, a sense of life being shared…often it shows itself within the other 3 cornerstones. Love, whether in the form of friendship, romantic partnership, or any other type, is like the fuel for how we relate in the world. Usually, this takes the form of human relationships.

In Search of Bliss

Though it doesn’t actually come from the Japanese conception of Ikigai, Marc Winn’s famous venn diagram has been adapted and re-adapted to reach millions, all under the concept of Ikigai.

In truth, it’s a valuable concept that illuminates a bird’s eye view on happiness.
For that reason, we’ve created the Bliss Map.
Here it is: 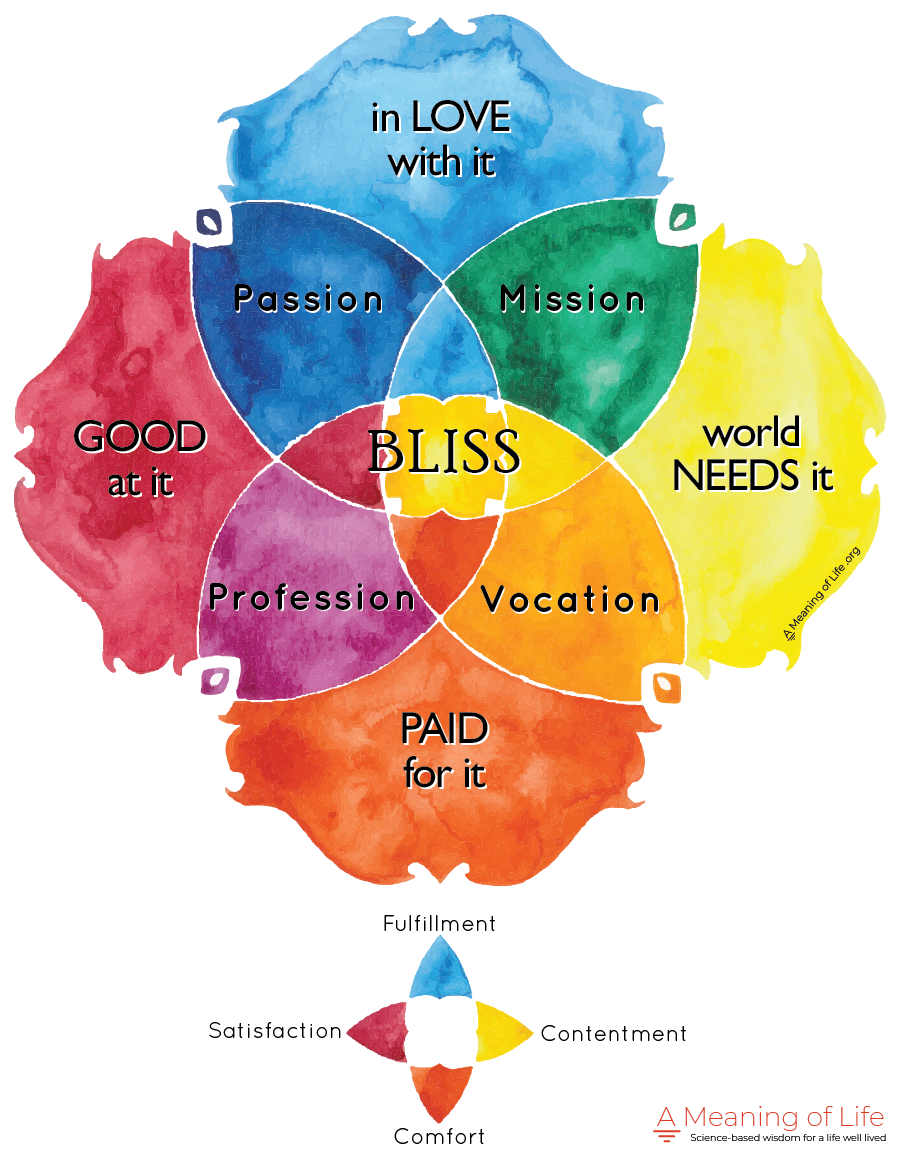 If you haven’t already, please go explore this group of pages. There, you’ll find elaboration and explanation for how to use that map in finding Bliss in life and work. You’ll even find resources like videos, links, and more.

The following are some books we’ve enjoyed on the subject of Ikigai. Each brought their own unique offering, as you’ll see below. You can click the book image to be taken to Amazon, where you can buy the book or read more.

This book is a great first read for the subject. Like the others on this list, it goes beyond Ikigai to comment on Okinawan secrets to health, nutrition, exercise and more.

The book shared these ‘10 Rules of Ikigai’

Author of  over 100 books, many bestsellers in Japan, this is Mogi’s first book in English.

This book is an enticing tour of Japanese culture and lifestyle. It portrays Ikigai as something that can be obtained any day, under any circumstances, by the small things and the moments that we live.

The book’s primary model is that Ikigai has 5 pillars:

This book is a very simple read, and it’s hot off the press. Written for a broad audience and easy to digest, the author relates Ikigai to his own life, and explores instances of Ikigai in the world like a journalist, which he once was. The book, using Ikigai, can offer a helpful framework for someone new to contemplation and seeking happiness. Here are a couple of key take-aways:

A Journey into the Japanese Secret to Living a Long, Happy, Purpose-Filled Life
By Amanda Kudo

This is a fun, interactive, colorful, and pragmatic journal of more than 120 pages of questions, exercises, and inspirations. The goal of the book, through prompted self-reflection and writing, is to help you grow in understanding what you love, where you excel, how you see the world, and where you can make a difference.

Here are some highlights from within its pages:

Ikigai in the Village of Longevity

A simple and soothing mini-doc with interviews of old people from the village of Ogimi. Interviews start at 2:30.

Finding Your Life Purpose with Ikigai

This is a nine-minute interview with Ken Mogi, author of Awakening Your Ikigai, in which he gives his insights.

If you prefer videos to books, this is a good summary of Ikigai: The Japanese Secret to a Long and Happy Life.

This is the TEDx talk from Tim Tamashiro, author of How to Ikigai.

TEDx – Ikigai: the Secret to a Purposeful Life

Emily Bidle gives a talk about Ikigai on the TEDx Youth stage. This is a simple talk, and it’s interesting to hear from a young person on the subject.